This Is One of The Biggest Discoveries Since Vitamins!

No need to count your daily fruits and veggies!

Science is always on the move… I mean real science, not the humbug we get from Big Pharma and the medical profession. So…By now we all have come to understand antioxidants far better today than we did a quarter of a century ago.

Everyone knows that oxidative damage is bad for us, right? That’s correct.
And we have always blamed things called “free radicals”, which produce a lot of tissue damage, right? 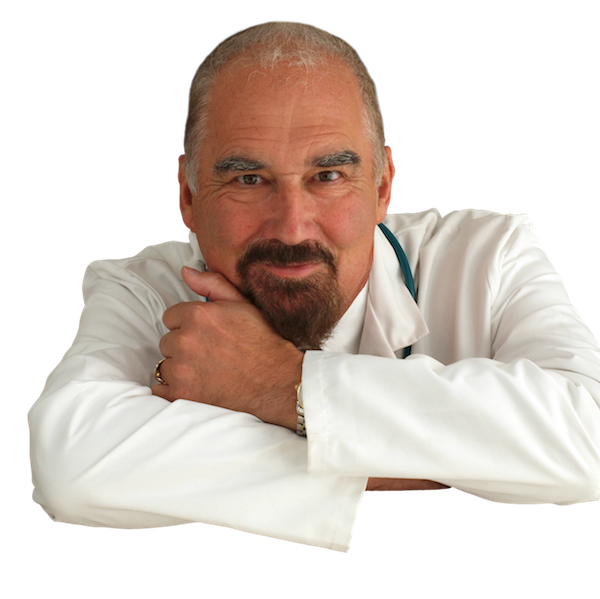 “Free radicals,” also known as acute oxidative stress can cause serious damage to other tissues, and persistent oxidative stress is one of the causes of many common diseases, cancer and the aging process.
So we eat fresh color-rich foods and take protective substances called "antioxidants" which protect us from this damage; we stay healthy; we live longer, right?
Well, not quite, as it happens.

It turns out that just blanketing with so-called “antioxidants” is not the best health strategy. We stop the bad oxidizing substances… but we also lose GOOD protective substances that Nature herself uses to combat oxidative damage.

This may be why there has been surprisingly little success in developing an effective antioxidant with no side effects.

In fact it will soon emerge that some of those upsetting science papers that were supposed to show that taking antioxidant substances might be harmful could be correct and not just a “conspiracy” against supplements.1

There is a whole new story. Let me share it with you in simple terms, so that you can understand the importance of this new thinking.

It's one of the biggest discoveries since vitamins

Not All Free Radicals are Equal

What has emerged, with careful science, is that not all “free radicals” (sometimes called “reactive oxygen” type substances) do the same thing.

The really BAD one is what we call the hydroxyl radical (hydrogen and oxygen combined together in equal proportions). I’ll come to that shortly.
But the rest—you may know some, like oxygen itself, ozone, peroxide and superoxide—do have a plus side. We don’t need much of them, but we do need some.
That turns out to be crucial for a mechanism called REDOX signaling. It's a very important defense pathway.
Nature uses REDOX signaling to keep free radicals under control. RED-OX stands for reduction and oxidation, which is all about the activity of free radicals.
The so-called superoxide radical is not, in truth, as active or damaging as the basic oxygen molecule, despite its name! It’s part of a special class of antioxidants that protect your cells. Peroxide ion is generated briefly by certain white cells, to kill microbes before ingesting them. It’s only when out of place it is potentially harmful to us.

Unfortunately, unlike these two, the hydroxyl grouping cannot be eliminated by an enzymatic reaction. It’s deadly and we seem stuck with it. Or are we?

Why Hydroxyl Radical Is The Real Villain

The hydroxyl grouping can damage virtually all types of larger biological molecules: carbohydrates, nucleic acids (mutations), lipids (lipid peroxidation), and amino acids. This is why antioxidants have helped so much.

We need to get rid of it in our tissues, as fast as it forms. It is not part of the REDOX signaling pathway, meaning it has no positive use, causing it to be extremely damaging.

Can we selectively fight against the deadly hydroxyl ions, without harming the good guys... superoxide and peroxide, etc?

YOU BET (come on, why else would I be telling you about this!)

The answer is the commonest substance in the universe, hydrogen.

In fact, hydrogen atoms are over 90% of all atoms in the cosmos, right on down to the solar system. In actuality, just two atoms—hydrogen and helium—between them form 98% of the mass of the entire universe! More than that: hydrogen comprises more than two-thirds of all the atoms in the human body.

But this is not about the commonly discussed form called hydrogen ions, which give us our phenomenon of acidity and alkalinity (the more hydrogen ions, the more acid).

I'm talking now of hydrogen gas, you know, the stuff that burns up airships! Hydrogen (symbol H) likes to hang out in pairs, hence H2.

We call this "molecular hydrogen", because a set of two or more atoms is called a molecule.

Molecular hydrogen is a wonderful vacuum cleaner for dangerous hydroxyl ions! In fact, even duffers at school can get this: H2 (molecular hydrogen) + 2OH (2 hydroxyls) = 2H2O. In other words 2 molecules of water!

If only we could regularly flood our bodies with this molecular hydrogen, we have a greater chance at living more quality lives. 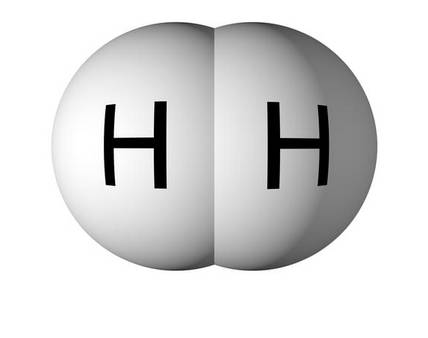 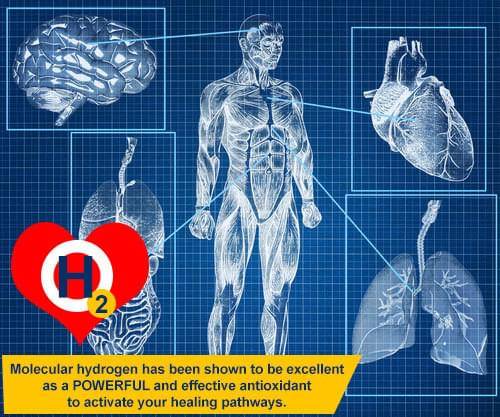 It is mild enough neither to disturb redox signaling, so there should be little adverse effects of consuming molecular hydrogen. In fact, there are no adverse effects reported.

The best part is that molecular hydrogen (H2) selectively fights against the deadly hydroxyl radical, while preserving some traces of useful "free radicals" that the body actually needs for its REDOX signaling.

Since the publication of the first molecular hydrogen paper in Nature Medicine in 2007, there have now been over 1200 papers published in peer-reviewed journals demonstrating the true health benefits of molecular hydrogen.

✔
H2 not only promotes healthy effects against oxidative stress, but also reduces inflammation to healthier levels while also having effects against allergies.
✔
H2 regulates various gene expressions and even helps trigger more of the body's own onboard antioxidant mechanisms.

It's worth repeating: emerging science supports that molecular hydrogen can have a profound health effect when it comes to fighting hydroxyl radical, while leaving undamaged the other oxygen radicals that are needed for physiological signaling.

There are several methods to ingest or consume H2, including:

All these approaches have been validated clinically. But by far the simplest, you will readily agree, is to swallow hydrogen-activated water.

The good people at Water & Wellness, founded by a veteran water scientist, have produced what I believe is the world’s best hydrogen activator. It’s called Active H2 ULTRA.

Simply pop a tablet into a glass of clean water (or wine!), then watch while the tablet dissolves and fizzes, releasing millions of tiny hydrogen nanobubbles, then drink the water!

How easy is that?

Doing this once a day mimics the effective clinical dose used in the hydrogen therapy research. This literally floods the body--every nook and cranny--with free-radical fighting hydrogen. BOOM! Instant energy.

Safe? You kidding. Because hydrogen is so prevalent in your body already, a rush of extra poses no threat. It's a completely natural molecule. Your body is already 2⁄3 hydrogen! 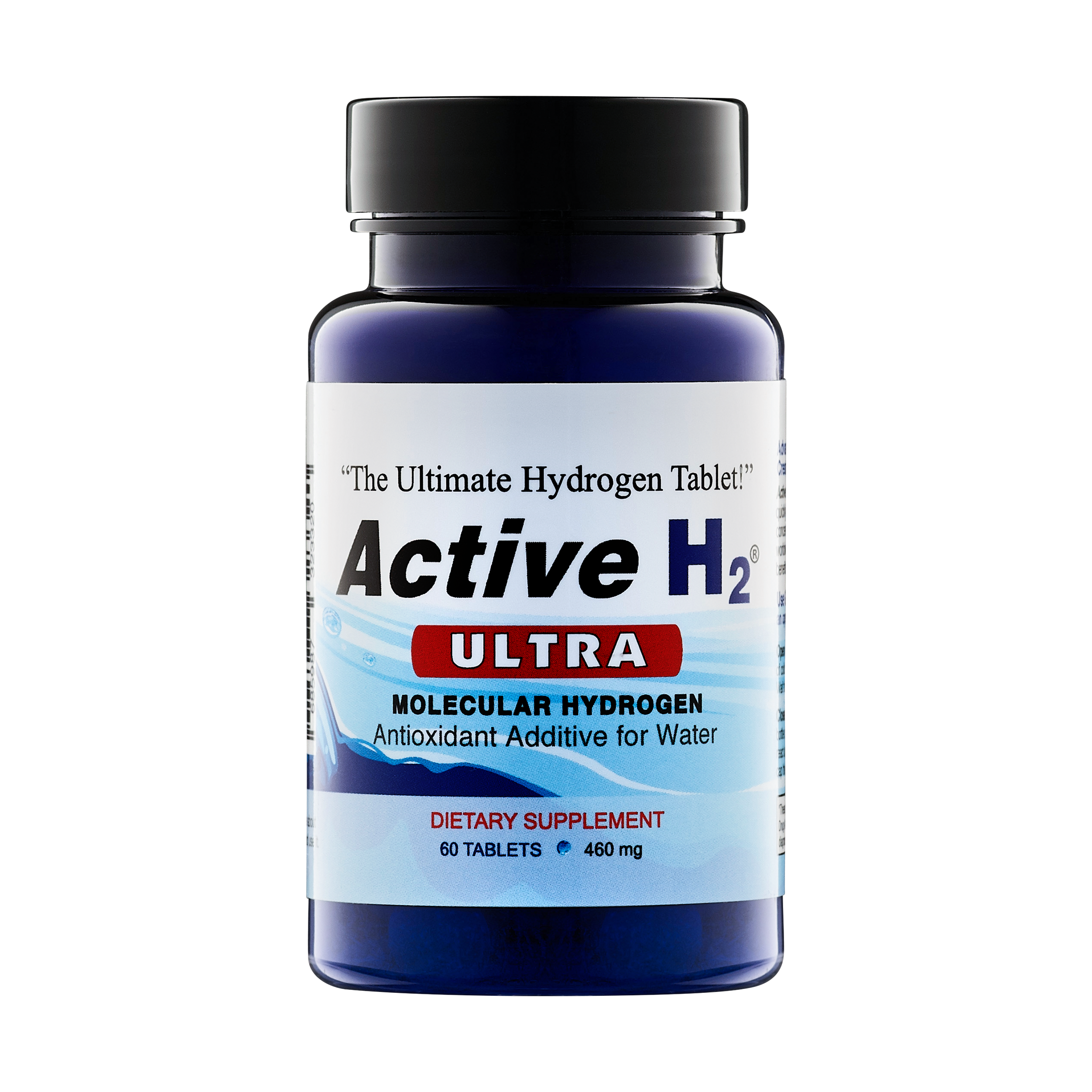 I feel an immediate rush when I take Active H2 ULTRA and an energy zing. I can't promise everyone gets that, but remember I'm 70 this year. I need an energy boost now and then!

Sportsters and gym junkies will LOVE this stuff. Give it a try.

What Else Does It Do?

It supports ATP production. That's the "energy molecule" made by mitochondria, our cellular energy house. Buzzing mitochondria, in turn:

There are other less obvious benefits, showing how good this "fountain of youth" molecule is:

✔
​It helps speed the healing process after head injurie
✔
​It helps keep your heart young and healthy
✔
​It supports the proper functioning of the liver, kidneys, eyes, and brain. And that's just for starters (all in published scientific research, by the way).

In fact, the nervous and neurological tissues LOVE molecular hydrogen. I already mentioned it helps promote proper brain function, but it’s also important to know it also aids in the healthy recovery from spinal cord damage while helping diminish cell loss, meaning less chance of paralysis from a cord injury.

All this was far in excess of results from just classical antioxidants, including vitamin E, folic acid and alpha-lipoic acid (ALA).

Another remarkable gift from molecular hydrogen is that it may help protect you against certain damage from treatments after receiving a dreaded diagnosis from your oncologist.

If you or anyone you know are contemplating allowing an oncologist to dose you, please be sure to include molecular hydrogen in your routine.

I can't say it will fully protect you but it will help enormously and it does not block the effective action of the chemo or radiation which is, after all, to kill cancer cells.

Reading from the Journal of International Medical Research before me:

"Recently, many studies have reported that H2 (inhaled or orally ingested...), can promote beneficial health effects in diverse animal models of is chaemia injury (shut off blood supply), and inflammatory and neurological disease. In the clinic, oral administration of H2-saturated water is reported to improve lipid and glucose metabolism in subjects with diabetes or impaired glucose tolerance; promising results have also been seen in haemodialysis patients with inflammation and in treating metabolic syndrome.

What more do you want? Start taking it today. Your body will love you for it! 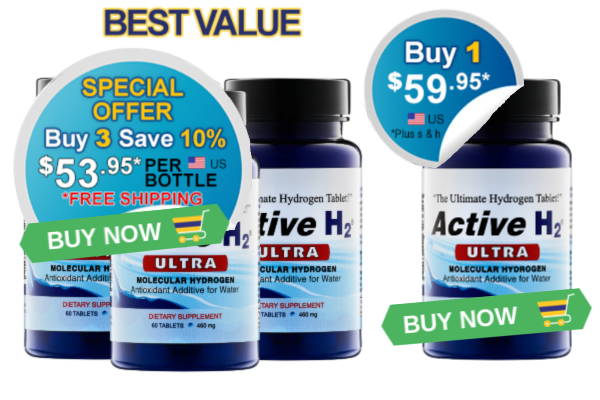 There are machines coming on the market (usual multi-level inflated pricing and outrageous claims) that can generate molecular hydrogen. Now that the alkaline water nonsense is gone (see, I've told you over and over it was a marketing hoax), savvy traders are switching to newer machines. You'll see more and more of these offered. Kangen and Jupiter and other "funny water" scammers will soon be on it.

Basically, they are not very efficient at this time. The problem is that such devices cannot generate a high level of hydrogen because at about 1 ppm the H2 escapes as fast as it is produced. Nevertheless 1 ppm is better than nothing and it will provide some health benefits if consumed immediately.

But be warned, some H2 appliances I have seen from Korea and Japan are horrible and barely make H2 at all!

Basically, it is way too early in the game to rely on an electronic H2 appliance... Active H2 will be the preferred source of molecular hydrogen for the foreseeable future, because it is more POTENT, more PORTABLE (easy to carry around), and offers more possibilities (adding ORP electron potential to store-bought juices to revive them back to freshness).

Active H2 is made freshly from tablets which you add to water and H2 is made right there, in the bottle or glass.

The tablets are constituted of:

✔
Malic acid which supports the body's energy reserves, while improving mental clarity and reversing muscle fatigue
✔
Magnesium, one of the most vital nutrient minerals needed for all body processes and functions
✔
Fumaric acid, which is vital in ATP production, detoxification and anti-oxidation.
✔
​Mannitol, a safe, natural sugar with minimal impact on glucose metabolism (it's used for head injuries)

We all need H2. Better get started today! This is not a sponsorship ad, this is me telling you what you need to do. I take Active H2 ULTRA, every day.

GET YOUR ACTIVE H2 ULTRA HERE 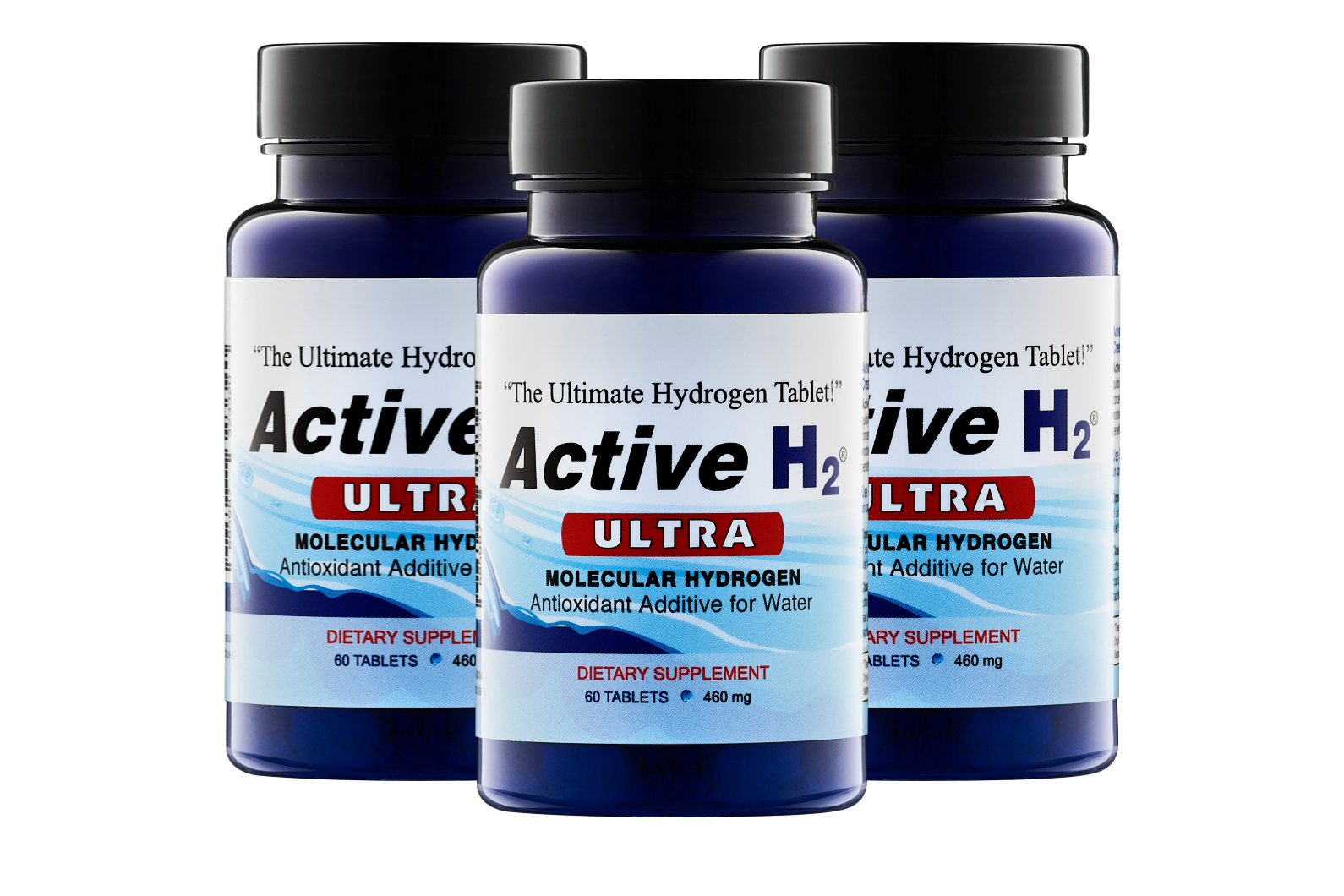